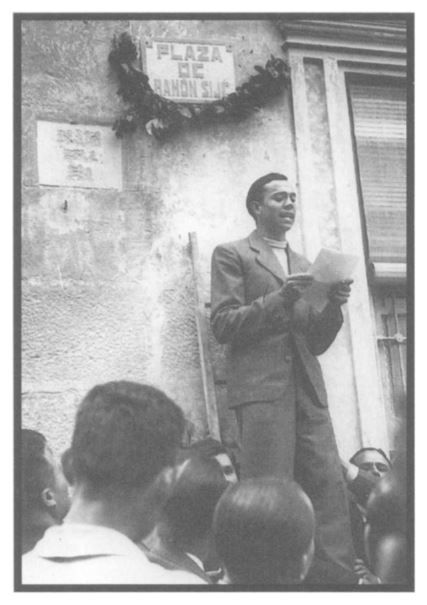 Nations of the earth, fatherlands of the sea, brothers of the
world and of nothingness:
inhabitants, lost and farther
from sight than the heart.

I am open, look, like a wound.
I am drowned, look, drowned
in the midst of my people and their ills.
I go wounded, wounded and maimed,
bleeding through trenches and hospitals.

Men, worlds, nations,
pay heed, listen to my bleeding cry,
gather mybreaking heartbeats
into your spacious hearts,
because I clutch the soul when I sing.

Singing I defend myself
and I defend my people when the barbarians
of this crime would stamp them
with their hooves of gunpowder and clamor.

This is their work, this:
passing, razing like whirlwinds,
and before their dismal bile
the horizons are armsand the roads are death.

Caravans of beaten-down bodies.
All is bandages, pain, and handkerchiefs,
all is stretchers on which the wounded
have broken their strength and their wings.

Blood, blood through the trees and the soil,
blood in the waters and on the walls,
and a fear that Spain will collapse
from the weight of the blood which soaks through her meshes
right to the bread which is eaten.

Gather together this gale,
nations, men, worlds,
which proceeds from the mouths of theimpassioned breath
and from hospitals of the dying.

Apply your ears
to my clamor of a violated people,
to the oh! of so many mothers, to the groans
of many a lucid being whom grief devoured.

The breasts which drove and wounded the mountains
see them languish without milkor beauty,
and see the white sweethearts and the black eyelashes
fallen and submissive in an obscure siesta.

Apply the passion of your entrails
to this people which dies with an invincible gesture
scattered by the lips and the brow,
beneath the implacable airplanes
which snatch terribly,
terribly ignominiously, every day,
sons from the hands of their mothers.

Cities of the world and innocence,
youths who blossom from the oak,
trunks of bronze, bodies of potency,
lie fallen into ruin.

A future of dust advances,
a fate advances
in which nothing will remain:
not stone on stone nor bone on bone.

Spain is not Spain, it is an immense trench,
a vast cemetery red and bombarded:
the barbarians have willed it so.

The earth will be a dense heart, desolated,
if you, nations, men, worlds,
with the whole of my people,
and yours as well on your side,
do not break the ferocious fangs.

But that won’t be: for a stomping sea,
triumphant always, always resolute,
made for the light, for heroic exploit,
shakes its head of rebellious diamond,
pounds its shod foot on the sound
for all the cadavers of Spain.

It’s a generation of youth: gather this wind.
Their blood is the glass that never fogs;
their hat, the laurel; and the flint, their life’s breath.

Wherever they clench their teeth,
a volcano of transparent swords erupts,
their shoulders swinging,
their heels shooting flames.

Sea-like they pass time beneath
a din of sirens and manufacturing tools
and gigantic arcs illuminated by arrows.

Despite death, these good men,
with metal and lightning like shields,
make the cannons retreat
intimidated, trembling, silenced.

Gunpowder was powerless against them, they made fire from it,
sap, explosion, sudden greens:
with the power of their impassioned flower of youth
they quickened the soul of the lavender,
the product of the mine,
the fertile movement of the plough.

They will make a meadow from each ruin;
out of each sorrow, a fruit of happiness;
out of Spain, a firmament of beauty.
Look at them making the midday gigantic
and beautiful with their youthful bravery.

They deserve the foam of thunderclaps,
they deserve life and the scent of the olive tree,
these ample and serene Spaniards
who glance about like a proud bird.

Nations, men, world, this I write:
the youth of Spain will leave the trenches
on foot, invincible like the seed,
for they have a soul filled with banners
that never submits nor falls to its knees.

There over the barren plains of Castile travel
these bodies that seem to be battling colts,
bulls of victorious outcome,
expressing with their blood of generous flowers
that dying is the greatest thing one can do.

In time they will be left the victors,
forever covered in sun and majesty,
these warriors of such gallant bones,
for if they’re dead men, they’re gallant dead men:
these youths will save Spain, even if they have
to fight with rifles of jasmine
and a shotgun of wax.